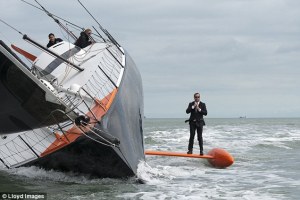 Once our 6-months pregnant gym instructor came in saying she was feeling a bit dizzy, but promised not to keel over, which I found quite reassuring, considering that another gym instructor did just that a few weeks before that.

‘To keel over‘ means to suddenly fall because you feel ill. Apparently, this can be applied not just to people, but to computers and the like. It is also used when talking about a ship that falls sideways.

– My email would keel over every time I tried to open this attachment. This was incredibly annoying!

– Yet all over India the tea industry is keeling over because prices have crashed. Tea has not become a penny cheaper for the people who drink it by the gallon on British housing estates (The Guardian).

– Nowadays I wouldn’t feel comfortable working for people who didn’t know about my condition [epilepsy]. It means that I can tell them what to do if I have a fit and I don’t have to play at being someone I am not. People accept that once every few months I keel over (The Guardian).

– Picture soccer fans partying where tanks and missiles paraded on Red Square in the Cold War’s darkest days. Imagine high-tech, air-conditioned stadiums chilled so players and spectators don’t keel over in the sweltering desert heat of the Middle East (fifa2022qa.com).