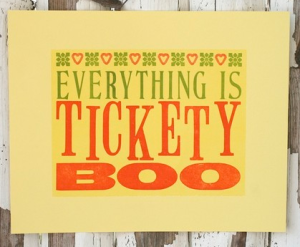 Today I heard one of those funny English words that I think nobody really uses, but apparently they do! I popped into a shop where I was volunteering to offer to do a shift on Tuesday during this busy pre-Christmas week and the shop manager said ‘Great! Tuesday is tickety-boo then’. So I left with some Christmas decorations, a pack of Christmas-tree-shaped biscuits and a new word!

‘Tickety-boo‘ means that something is satisfactory or going well.

If you are in need of some examples of how it’s used, read on:

– The recent health checks by European regulators of European banks – the so-called stress tests – found that most of them were tickety boo (BBC).

– Doherty’s Old Albion Englishness – the William Blake allusions, the pork-pie hat, the “tickety-boo” expressions – that seemed a bit fantastical at home are lapped up in France. He plays up to the Englishman-in-Paris tag (The Guardian).

– Landmark Trust properties are not cheap, and three nights even in the nadir of off-season will set you back nearly £800. But divide that between eight and consider that the money is brilliantly well spent on other restorations (Astley alone cost £2.5m); and everything at a trust property is absolutely tickety-boo (The Guardian).

– Boyle praised her as a “good actor” and said she had got on “tickety-boo” with Bond actor Daniel Craig (The Guardian).

– The prime minister’s aides insist that relations between the two old Etonians are fine, though if they were really that tickety-boo they would not have needed to stage a “reconciliation” meeting before the conference (The Guardian).