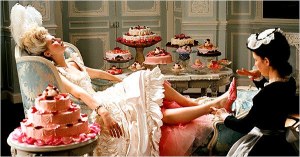 Today at work I got a message about a colleague leaving because… she’s getting married. Everyone was very surprised that a wedding could be a reason for quitting a job and somebody asked her ‘Are you going to be a lady of leisure then?’ This expression, when used about myself, used to drive me crazy. If I didn’t have a 9-to-5 job it didn’t mean that I was spending my days shopping or having my nails done. I’d say that being ‘a lady of leisure‘ here in the UK is usually frowned upon, so think twice before admitting it!

You’ve probably guessed by now, but it means ‘a woman who does not have to work, especially because her husband earns a lot of money’ (MacMillan Dictionary).

Here are a few examples of this expression that I’ve found:

– The Muslim religion was born in the Arabian desert, in a tribal society of pastoralists and traders who were also part-time warriors. Such a society is almost always run by men. Islam then exploded into the Byzantine and Persian empires, some of whose social habits it picked up and distorted to the subsequent disadvantage of its own women. The conquering Muslims found in occupied Damascus rich women who wore veils to show that they were ladies of leisure (The Economist).

– All this has important implications for the role of women in the labour force. Historically women’s participation in the world of work has always equalled men’s. The lady of leisure sitting in her parlour was the rarest of exceptions even in a wealthy 19th-century society (The Economist).

– Ms Israel, who started work at the plant when she was 16 and who has never been abroad, said:”I’m going to be a lady of leisure” (BBC).

– I’d like to see more of my friends and my family and my little dog Rafa. If I want to go skiing, I can, so I’ll be able to enjoy that and that’ll help ease the pain that I’m not playing badminton any more. In other words, I’m a lady of leisure now! (BBC)

One thought on “Lady of leisure”