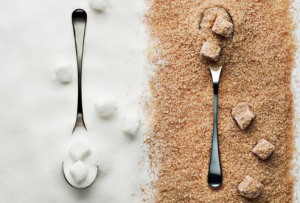 Yesterday I was sitting in a park proofreading my translation and occasionally glancing at other people. There was a group of teenagers who were skating down a hill on a funny kind of skateboard. I heard one of them saying ‘Sugar!’ (pronounced like shhhhh-uga) and remembered that it was a nice euphemism for ‘shhhhit!’

Today it occurred to me that I came across quite a few expressions with ‘sugar’ lately and thought I’d put them all into one post.

The other day I emailed my French colleague asking her to recommend some cafés and salons de thé in Paris. She emailed back saying ‘I don’t know many traditional salons de thé but in a it’s 4 o’clock, I need a sugar fix kind of thing, I can recommend’…. followed by a list of tea and coffee establishments. It can also be called ‘a sugar hit‘ and ‘an afternoon pick-me-up‘.

The same colleague once used a term ‘sugar fascist‘ about a parent who doesn’t let his/her children eat sweets and I made a mental note of this expression – now is the perfect time to share it with others.

However, those children with more lenient parents who don’t mind giving sweets to their offspring, might get a ‘sugar rush‘ (i.e. become hyperactive and uncontrollable), at least that’s the popular belief.

Here’s a good example in context:

There’s another sugar phrase – ‘sugar daddy‘ – I don’t remember how I came across it though. And it means ‘an older man who gives a younger woman expensive presents, especially in exchange for a romantic or sexual relationship’.

P.S. When I think of the word ‘sugar‘ a song immediately springs to mind – this is a great episode of one of my favourite films and books – ‘Hi-Fi‘ by Nick Hornby.

One thought on “Sugar”