To have somebody down as…

Apologies again for my rather long absence – there’s been a lot going on lately (and there’ll probably be even more on going on soon – details later), but I reckoned that even one new post is better than none, so here you go!

I’ve been watching BBC’s Doctor Foster drama lately, and there was a phrase in one of the previous episodes that caught my attention – ‘I’ve always had you down as (organised)’. I’ve come across it before and I think it’s a great phrase to embellish your vocabulary. Essentially it just means to ‘consider somebody to be of a certain type’, but it sounds so much nicer!

Here are some more examples:

– I never had Jake down as a ladies’ man (Oxford Dictionaries).

– The tabloid press has had him down as a privacy-obsessed neurotic weirdo pretty much ever since, and there is very little he can do about it (The Guardian).

– I had him down as a coffee-boy layabout, as I used to call him, and thought he was rather arrogant. But when I got to know him – it’s quite tragic really. I had an unhappy childhood, too, so there was a bit of an understanding there, although we never talked about it (The Guardian).

Keep a wolf from the door 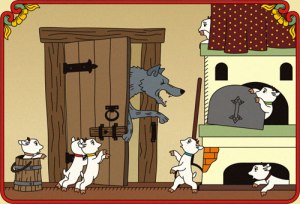 Another gem from Shaun Keaveney’s breakfast show! He didn’t come up with the idiom, of course, but he reminded me of it. To cut a long story short, he was taking the mickey out of his co-presenter, Matt Everitt, saying that he might have a part-time job at ‘to keep the wolf from the door‘.

The idiom means ‘to have enough money to avert hunger or starvation’ and is used hyperbolically (Oxford Dictionary).

A couple of examples:

– Having made enough money to keep the wolf from the door I am concerned with making the world a better place, like many other people (Oxford Dictionary).

– Today, dog lovers Steve and Adele try to make their fortune from their furry friends by preening the pooches of southern Spain – but will they make enough to keep the wolf from the door? (BBC)

P.S. There’s a brilliant song by Radiohead, ‘The Wolf at the Door’.