How long is too long?

Today I had what might almost be called a ‘business meeting’  in London. The person I was meeting mentioned that he was negotiating with a certain company for so long that its managing director died. At this point my eyes nearly popped out.

I immediately remembered all the things that seem to take a disproportionately long in this country compared to Russia, where I come from. To paraphrase the words of King George VI from King’s Speech, waiting for a BT engineer to come one can wait a rather long wait. I also remember how I came to the university library to get a library card (which only gets a few minutes to print and issue) and was asked whether I could pick it up in a couple of weeks. I couldn’t. On another occasion I amazed a whole bunch of people by completing a task, which they thought would take a couple of weeks, in under one hour – and I swear it was no rocket science.

I’m still trying to figure out why these things take such a long time. Can it be that tea-drinking gets in the way?

I need it yesterday! 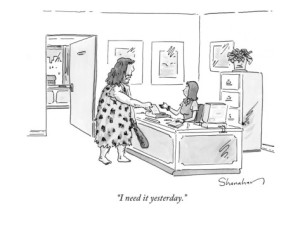 The other day I was watching an episode of ‘Lie to me’ (it’s what other people were doing 3 years ago) and one of the characters, a big boss, was telling somebody ‘I need it yesterday!’ This phrase caught my attention not so much because it was new, but because there is exactly the same phrase in Russian, but I’ve stopped assuming that similar phrases should necessarily exist in other languages.

Somehow translations turn out to be the thing that the clients often forget about or leave until the very last moment, subsequently calling a translator or an agency and saying that they need it yesterday. Isn’t it sweet?

Here are some more examples of the usage:

– Does this ever happen to you? Your client calls and says ‘we need this done immediately – right now – like, yesterday!’ And you’re up to your eyeballs in other work. You don’t want to let your client down because the relationship is important and you don’t want to say yes because you’re really manic (Badlanguage.net).

Whenever I came across a phrase ‘no timewasters‘ in adverts where people were selling kittens or furniture or some other stuff I used to wonder what exactly that meant and how exactly these timewasters could waste your time. Until I found out.

My car almost completely disintegrated and I had to sell it. So I posted an ad on one of the local websites hoping to get rid of it fairly quickly. As my husband and I were watching a film on a Friday night somebody texted to enquire if I still had the car, which I did. Five or six texts were exchanged to inform the potential buyer of what exactly was wrong with it and tell him where I was based (which I did of course mention in the ad). We agreed that he’d come next morning between 9 and 10 to pick it up. So next morning we woke up earlier (not really a bad thing) and skipped on a morning run, but no one came.

The guy texted several hours later to say he got drunk the previous night (how sweet!) but could still come in the evening. We agreed on 8 pm this time and went to play tennis as we had plenty of time until then. During the hour that I was playing tennis (and obviously not checking my phone) he called 4 times and texted saying he was going to come now, not at 8 pm. By that time I was getting really angry. I texted him again to ask if he was going to come after all but got no reply. Now that’s one serious timewaster! Now I know exactly what that means!

PS. We did sell the car after all.

To stick to your guns 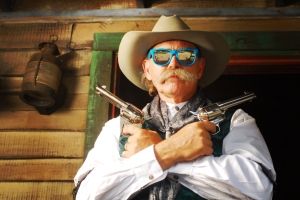 Today our landlord was showing new potential tenants around the flat and he touched upon the issue of parking, which has been a real nightmare for me ever since we moved here. The issue with parking is simple – there is none, so I end up paying at least a few quid every single day (ok, apart from weekends) to just be able to park my car. He was saying that all the residents have been applying to the Council to get parking permits, but they ‘stick to their guns‘ and insist that there is going to be no parking.

‘To stick to your guns‘ is an informal way of saying that  you refuse to change your mind despite what the others are saying or doing.

Below are some examples:

–  I have told my husband I won’t attend, but he says I should go out of respect for his parents. Do I stick to my guns by not attending? Or should I just attend, given it is only one hour of the year? (The Guardian)

– He has had most success where he has promoted choice in public services and ensured that private companies can compete with public authorities to deliver services. He needs to stick to his guns with this approach  (The Guardian).

– Made any resolutions for 2006? Broken them already? Or are you sticking to your guns? (BBC)

– But with America sticking to its guns, the Hatoyama administration is bound to upset one side or other (The Economist).

– Mr Zapatero wisely said this week that he would stick to his guns. But he is on the way out  (The Economist).

I recently watched the ever-so-popular Monty Python’s Life Of Brian and I can honestly say it was one of the funniest films I’ve seen recently. There was one word in particular I wanted to remember (and a great way to do so would be to mention it in this blog) -‘to haggle‘. There was a scene when Brian was fleeing from the Roman soldiers and wanted to buy a beard from a man in the market to disguise himself. However, the man wasn’t prepared to part with the beard without the haggling ritual (the transcript of the whole scene can be found here).

Below are some examples of this useful verb:

– In the markets of Cairo there are no prices on the items, and people are expected to haggle. While the presenter is haggling she emphasises how to say yes – na’am – and no – laa – in Arabic (BBC).

– We love Porte de Vanves it is a proper ‘broccante’ junk and antiques in equal amounts or one person’s junk is another person’s antique. But this is a place where you just don’t know what you might find and you don’t know what you might pay; this is a place to haggle and enjoy the bargaining. But mostly this is a long long street full of stalls with an amazing array of just about everything you can think of including the kitchen sink (Tripadvisor.co.uk).

– Smithfield [market] is both cheaper and friendlier to those determined to haggle (The Economist).

However, it is not only the price that can haggle over:

– Even if the governments could today agree on what to do, haggling over the details, holding referendums and amending constitutions could easily take three years. The delay in even starting that process is only making a difficult task harder (The Economist).

I heard this phrasal verb from our gym instructor, which makes me think that sport can be good for you in more than one way! She said something along the lines of ‘We are going to do a new dance routine today, but I’ve only taught it once so far and there are a few things to iron out‘.

According to the Cambridge Online Dictionary, it means ‘to remove problems or find solutions’.

Here are some examples in other contexts:

– They’re meeting in Berlin to iron out the final details of the contract (MacMillan Dictionary).

– K-19 was a real Russian nuclear submarine, launched in 1961. In Kathryn Bigelow’s movie, it is launched too soon, under political pressure, which means that tiny details like drips, fuses, and nuclear reactors have yet to be ironed out (New Yorker).

–  The Fed could be preparing a more aggressive approach to easing but wants to see a bit more data or take a bit more time ironing out the new policy before deploying it (The Economist).

– US secretary of state Hillary Clinton and Russian foreign minister Sergei Lavrov are due to meet in St Petersburg today in a bid to iron out deep differences over the transition plan, according to AP (The Guardian).